May 2, 2022 Comments Off on The Guardsman Issue 7, Fiction, literature, short story, Staff Picks, Writing  Like

The floor of the wooden tower was all that separated him from the creature whose claws dragged in the dirt with each limping step it took. Its jaws clacked together again and again, and the broken chains around its neck jingled when it turned to look up at the guardsman. He understood the risks of his position, and he understood the protection afforded to him by God. The creature howled at him from below, and the guardsman held his silver cross close to his chest, almost fearing that his vice-like grip would somehow snap the stout metal. Be my guide and my strength. Ward off the evils that plague me and my townsmen. His prayers were wordless and his mouth moved without trembling.

The creature continued to howl, though its tone turned to one of pain as the guardsman continued his pleas for divine intervention. Destroy the evil ones, burn their hearts with fire as the people of this small village, Conciderunt, stand against their might. His hand ached to reach for the sword at his side, but the strength of his arm was of no use against the horror that haunted his guard tower. Claws dug into the ground as the guardsman’s wordless speech echoed into the heavens for every angel to hear. He worked his hand down the cross, gripping it at its base rather than enclosing it entirely within his fist. Foul demons surround me. Give me the resolve to hold my head high, to not recoil at the stench of their breath. Give me the courage to face them and demand they leave in Your Name. The chains rattled and the tower rocked as a claw struck one of its supporting beams.

Creaking floors gave away the fragility of the platform, and the heart of the guardsman began to pound in his chest. He looked around frantically as the ground beneath him shook. Every slash, every ram of knuckles against the support beams put fear into the guardsman’s heart, and he instinctively reached for the sword at his side, leaving the silver cross to hang around his neck on its cord. The intensity of the attacks grew as he was pulled away from his prayer, and the guardsman knew the bottomless cunning of these nightmarish beasts. He breathed in deep, ragged breaths, then took his hand from the hilt of his longsword. Banish this beast to its home. Send it to the depths of the deepest pit. Let it never return. The guardsman stepped to the edge of the rocking, shaking platform and looked down at the beast. Its glowing blue eyes and claw-endowed, humanoid hands longed to get a hold of the guardsman. But he held his silver cross forward and silently demanded the creature be gone. Take his soul far from here, break his body against the rock of your glory. And at his silent prayer did the creature growl. It opened its jaws and shrieked, the acrid miasma of its breath forcing the guardsman to turn his head. And there, off in the distance! Lanternlight shone on the distant road, the unmistakable gleam of silver blades reflecting its rays. The guardsman smiled, and the creature fled. Thank you for your mercy. I ask for your hand in the hunt tonight, may it go as your will commands.

As the creature disappeared into the night, the guardsman reached for his sword. 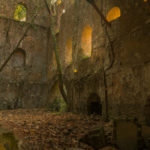