The Harvestman: Murder in the Town of Wayfarer’s Rest

May 6, 2019 Comments Off on The Harvestman: Murder in the Town of Wayfarer’s Rest Death, Fiction, Issue 4, Writing  Like

Once upon a time in the dead of a warm night in July, four boys sat around a campfire in a graveyard at the edge of town. The breeze threw patterns into the tongues of fire, and the shadows of the night danced across the skinniest boy’s face. He was the haunted one of the group, a tired soul that knew far too much for his age. The other boys called him Bones, though his mother called him Jacob.

“Long ago, when the Harvestman murdered the Huntress of the Bog, this graveyard was just a field, and on its edge was a cottage,” said Bones, starting his tale. “In the cottage lived The Good Man, and his wife was called Luna. She looked very much the way her name soundeds. She was beautiful, enchanting, otherworldly, even. The Good Man loved her dearly.” He looked down into the fire for a moment, and the three other boys waited in suspense. An owl hooted in the distance, and Bones looked back at his audience. He turned to Murphy first, and Murphy shuddered as the soul-piercing gaze fell upon him.

“It was a bright sunny day when things went bad. Two men in black cloaks came riding up to the house on the devil’s own horses. One had a mane of fire and the other was rotted as the old mare that Mr. Vickers shot in the head two weeks back. No one took her off the road and she just decayed there. You remember the smell, Zack? You were with me when I saw it,” said Bones.

“Smelled like death, nothing more to it,” said Zack, his chin resting on his knee. The others glanced over at Zack when he spoke, then looked back at Bones, who was taking a breath. The fire burned bright, and the heat of the coals burned against the four boys’ faces. Bones sat right up close to the fire as though his skin were dead, as though he didn’t feel it.

“It smelled like burning death as the two black-cloaks dismounted from their hell-steeds and knocked on The Good Man’s door. He, not knowing any better, opened it up and saw the two dead men standing on his front step, their horses stood statue-still in the background, one burning, one dripping rot. Now The Good Man was a man of virtue, he didn’t worry about what these dead men could do to him, and the dead men saw that he was not afraid.”

“The second Dead Man, he who rode the rot-steed, spoke first. ‘Have you no shame? Tremble at the arrival of the Dead Men of the West, for we come but once per age,’ he said. His voice was a rasp, his vocal cords had broken glass in them. ‘Or be cut down where you stand,’ chimed in the man who rode the flame-steed. But The Good Man had no fear of death in his heart.” Bones cleared his throat and took another breath, taking a moment to observe the others. They were on the edge of their seats, all but falling into the fire. Murphy was chewing his nails off. Bones raised his hand up and pointed his index finger to the sky as he began again.

“No fear of death, because to die would send him to glory, you see. Now when he didn’t respond, the Dead Men of the West decided to talk more. ‘We are here because you’ve cheated life, Good Man, you’ve got all you ever wanted and then some, and you aren’t corrupt, ungrateful, or bitter. You don’t want more, so we’ve been sent to even the scales and make you human.’ ‘What is it you love most in life?’ they asked as one. The Good Man did not humor them. No, he stood his ground and stared into the black voids within their hoods. So the Dead Men grew furious. ‘You will have your life back when this field is ripe for our harvest. Fill it with souls, Good Man, and we will return your treasure,’ the first Dead Man said. Then the Dead Men of the West rode off on the steeds they borrowed from Beelzebub’s stables, and from the back room of the house, Luna screamed and fell to the ground, her heart no longer beating.” Bones went silent once more, letting the quiet sounds of the night tell his story for a moment.

“Why not kill The Good Man?” asked Ralph, who hadn’t made a sound throughout the story. His blue eyes were fixated on Bones, and he sat closer to the fire than Murphy or Zack dared, but not so close as Bones sat.

“Because the Dead Men of the West wouldn’t have fulfilled their job by killing him, no, The Good Man had to become something bad to make the scales even. On the night after Luna died, The Good Man was no longer deserving of his name. He walked into town by the light of the moon, a dirty blanket wrapped around his shoulders and a shovel in his hand. The Dead Men of the West had given him a job to do, so he went behind the filthiest tavern in town and waited there.” The fire crackled and shadows danced across the headstones all around them. Nobody dared admit that they were getting jumpy, nobody ever dared interrupt one of Bones’ stories.

“When three in the morning came around, an evildoer came crawling around the tavern, bawling his eyes out, all broken up. ‘Good Man, I’ve lost everything,’ he said. ‘My family will not see me and my livelihood is destroyed by what I done! Please help me, Good Man, help me get back onto my feet.’ But The Good Man was no longer there, in his stead was the man who’d replaced him. There was no mercy for the wretched, groveling evildoer, and the Man’s shovel glinted moonlight as it came down for the first time, breaking the evildoer’s body like an eggshell. The body was dragged back to this very field, and The Good Man became the Grave Digger. The evildoer’s body was the first to be added to this cemetery, and it’s said that the Grave Digger adds another every day, and that someday he’ll fill the whole field and be reunited with Luna. He kills those who have abandoned the light that was once in their hearts, he beats them until they’re unrecognizable and then drowns them with soil in this field. You’ll know when the Grave Digger is going to come for you, because you’ll hate yourself for what you’re about to do. Then he’ll hate you too, and he’ll add you to the field.” Bones’ voice had turned soft, and he stared into the fire as he finished his story. Murphy, Zack, and Ralph all watched him closely, wondering if there was more, but Bones had always told his stories sparingly. Nobody really knew where he learned them, and he never responded when someone asked. So they stared into the fire as they sat in the field of headstones and bad men, and the breeze made the flames dance once more. 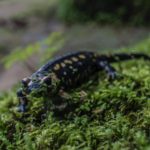 Frailty and Spring: A Farewell