There Was Once a Man Who Was Also a Bear 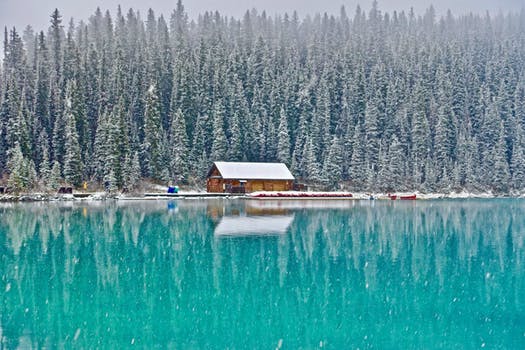 There Was Once a Man Who Was Also a Bear

The frozen wind cut through the trees, carrying with it the echoed howls of wolves in the distant darkness, the night that the boy was born.

Usually, the boy was just a normal boy. He would laugh and play in the sun with the other children. At night, when he dreamt, the sleeping boy became a small brown bear. When the little boy cried or became angry, he would become a bear again.

One day the boy was splashing through the puddles of black mud in the streets of the village to cool off in the summer sun. Across the square, he caught a glimpse of shining gold, and when he looked up, he saw a beautiful girl whose hair shined one hundred shades of golden in the summer sun.

The bear-boy and the golden-haired girl were inseparable and grew to their full heights hand in hand.

One day they argued, and the boy, overwhelmed by rage, became a bear. Blinded by his anger, he lashed out at the girl, leaving three long gashes down the side of her face.

As soon as he saw what he had done, the young bear turned and ran into the woods.

The bear ran until he came to a small meadow at the foot of a snowy mountain peak that dusted the clouds. He collapsed from exhaustion onto the budding flowers that littered the meadow’s edge. As he slept, the howls of wolves blew down the mountainside in the darkness.

The bear woke up a man. Upon seeing the meadow, he decided to stay. The man dug the rocks from the river for a chimney and cut the trees from the woods for the walls. He built a house.

Through the heat of summer, the man-bear built his house, and as the days grew shorter, he began to prepare for winter.

It appeared that the man had swung his ax a thousand times when the first fall breeze rattled the changing leaves. He thought he caught a glimpse of gold across the meadow as the last rays of the sun slipped below the trees. When the man looked across his meadow, he saw a woman emerging from the trees, her hair shining one hundred shades of gold.

The man’s heart leapt as his love made her way through the late summer flowers of the meadow, and it sank as he began to make out the three thin scars that decorated one side of her face.

Though the bear-man’s heart raged in his chest, he said to the golden woman, “Go back where you came from. I will only hurt you again.” He turned his face away so he could no longer see the way he had maimed her beautiful face.

“No,” declared the woman. She had followed him across the wilderness through many seasons, never once turning her head back over her shoulder to wonder if she should have stayed. “We are meant for each other,” she told him, and she put her hand on his cheek and turned his face back up to meet her eyes.

Whatever the man saw in her eyes stilled the rage at himself that he held in his heart.

“I will never turn into a bear again,” swore the man, and the golden-haired girl stayed.

The man and the girl lived happily in their house at the foot of the mountain that touched the clouds, and together they had three children.

Many nights when all the day’s work was completed and the chickens were in their coup, and the fire roared to keep the cold from creeping through the windows, the man would fall asleep in his chair by the fire. The smallest boy would curl up into his father’s arms and doze off in the warmth of the crackling flames. As the little boy twitched and murmured in his sleep, he would sometimes grow soft brown fur, and tiny claws, and become a bear.

On the darkest and coldest night of winter, the man and the bear-boy slept like this by the fire. The man woke with a start as the howls of wolves grew louder and began to chorus around the trees.

Starving in the winter cold, the wolves prowled into the man’s meadow by the dozens. The chickens screamed and then were silent. With their eyes shining and their whiskers encrusted in ice, the wolves scratched at the doors and the windows of the house, leaving trails of blood and feathers smeared across the glass.

As the glass of the windows began to crack and shift in their frames, the man thought that the situation needed some handling.

The bear-man handed his cub, whose little eyes were wide with fear, to his love. He slipped his fingers into her hair of summer sunlight and kissed her as if he would never see her again. The man tore himself away from the lips of his love, and once again, he became a bear.

The bear burst through the door and into the hoard of starving wolves under the bitter winter moon.

The bear fought the wolves deep into the cold winter night and far into the mountains of the forest. When the last starving wolf tucked its tail, and retreated into the darkness, the bear felt that every inch of his hide ripped and clawed apart, and he saw the trail of bloody paw prints that followed him through the trees.

The bear-man collapsed into the drifts of snow as the sky became light and gray. He closed his eyes and imagined that he was asleep in his chair by the fire, with a tiny brown bear asleep in his lap, as the life poured out of him and pooled into the snow.

Fiction, Issue 3, Writing There Was Once a Man Who Was Also a Bear
« Previous Story 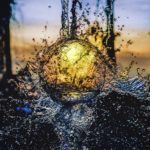 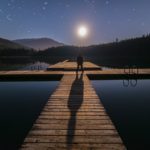 I am a Shadow