The Peculiar Case of Jib Tompkins

The Peculiar Case of Jib Tompkins

Jib Tompkins was not a nice man. This was the consensus of nearly the entire village of Wintershed, Vermont. Though no one really knew why. He was shunned by all. When the scruffy old hermit came down from the hills to do his monthly shopping, children hid behind carriages, women quickly crossed the street to avoid him, and the men he would pass would avoid eye contact—they would tip their hats forward and bury their chins to their chests. Perhaps it was his look—he was quite unkempt, perhaps it was the fact that no one had ever heard him utter a single word, or perhaps the village had simply forgotten why they felt such disdain for the ancient recluse.

This bright, late October day, in the last year of the nineteenth century, Jib Tompkins was in Clemen’s general store. There were no other customers and Raef Clemens, built like a brick, was loading the sacks of flour, sugar, coffee and other dry goods he had just sold Tompkins, into his wagon. It was a particularly large order as the roads would soon be impassable to the village; winter was imminent.

Though he had never spoken with Tompkins, he felt he was perhaps the only villager who felt empathy for this solitary old soul. The shopkeeper had known Tompkins since he was a child; his father had owned the store, so he had grown up loading supplies into his wagon for upward of fifty years now. Raef’s father, long dead, had told him many years before that Tompkins had had a calamity in his life and did not like to talk anymore. Raef always wondered what had happened, but never asked, out of respect. Anyone in the village who may have known what happened had already departed the earth long ago. Raef figured Jib Tompkins was aged well over ninety years, easily the oldest in the village.

He had always received a somber nod when Tompkins entered the store and another when they were done loading the wagon. Today, Raef’s mouth became agape, a canyon of disbelief, as Tompkins spoke.

“I think this winter will be my last. The loneliness I have felt all these years, the scorn of the village…” His long, sad face seemed to be holding back an ocean of repressed tears.

“I have no one. Please, in April, when the rivers run again and the crocus calls the hummingbird, come to my homestead with Crohn. I will be waiting.”

Crohn was the local undertaker.

Raef, so taken aback, stammered without saying anything. He managed his steadfast nod and Tompkins was off.

The bleak grey skies of a late Vermont fall gave way to a stifling winter of unforgiving nights, frozen and frigid, intermingled with blinding white snow covered days. As Christmas passed, Raef often thought about Tompkin’s request. January and February, the most tortuous of months, passed by painfully slow. March melted away and the hope and renewal of April appeared.

Raef wondered when he should make the trek to Tompkin’s home. Surely the old man could not predict his own demise. He would wait; maybe in a week or two. It was the second day of April, however, that Raef found himself at the village schoolhouse making an early morning delivery; the morning was unusually warm. Behind the schoolhouse, next to a couple of trees, a solitary yellow crocus caught Raef’s eye. As he stared at the early-blooming flower, his astonishment was heightened as he spied the manic wings propelling a beautiful ruby-throated hummingbird straight into the crocus. The tiny blur exited the blossom and flew straight toward Raef before darting away and around the front of the building. He thought back to Jib Tompkin’s request in disbelief, especially because the hummingbirds never appeared until at least the end of April.

Raef hurriedly made his way across town to the whitewashed funeral parlor. He desperately hoped Crohn was there.  The wrought iron gate invited him in with a creak of winter-induced rust. Crohn, willowy and ashen, with dark wispy beard trimmed to a triangle, removed his top hat as he ushered Raef into the parlor.

He listened as Raef told him what Tompkins had asked of him. His black, beady eyes pierced Raef, though without malice. He nodded slowly, almost knowingly, as he was told of the request and of the encounter with the hummingbird. Raef found it odd that Crohn was not incredulous of the story, as he himself was.

“We should go now. I have no affairs to attend to here. We will take your wagon. The hearse will not manage the wet and rutted roads; the wheels are too intricate. I do expect we will be bringing Jib Tompkins back.”

Raef nodded and went to the store to get his wagon. They arrived at the Tompkins place not with ease. The frost in the ground was working its way out and the roads were soft in spots where there was ample sun while hard and rutted in areas where the pines and naked old oaks partnered to cast shade and delay the warming of the earth.

It was noon when they arrived at the old homestead. It was worn and weather-beaten, yet tidy. Raef fully expected to find the old man dead and gone, but was heartened to see his two horses standing in the yard and the trough spattered with barley remnants. A rooster crowed and he could hear the nervous flapping of chickens in the nearby coop.

“The old boy must not have had his timing quite right.” Raef said to Crohn as they dismounted the wagon. Crohn looked at him stone-faced. The thought of the hummingbird jabbed Raef as he knocked on the front door. Nothing. “Jib Tompkins!” he called out. The knocking became pounding. Nothing. He turned the door handle. There was Tompkins, his eyes closed, seated in a well-worn, olive green upholstered chair. Raef detected a sliver of a smile on the old man’s face; maybe it was just a crease amongst the plethora or wrinkles. Crohn angled past him and took the pulse.

“He’s gone, but it was recent. Very recent. He is not completely cold.” They wrapped the hermit in a blanket and loaded him into the wagon. Raef fed and watered the animals, leaving extra, and telling them he would be back the day after next to do the same.

As they rode back to the village, Raef asked Crohn about the funeral and how they would notify the next-of-kin.

“Didn’t have any,” Crohn said. “Tompkins paid me for his funeral years ago. Paid for his plot too. Right next to his wife’s. It is a…special spot.”

“Wife? What wife?” Raef was incredulous.

“His wife died in childbirth sixty years ago, along with the child. Tompkin’s heart was broken. My daddy buried the wife and unborn next to each other. Tompkins paid the village council a handsome sum for a variance on a small plot next to the schoolhouse.”

The two rode on in silence as Raef digested what he had just been told. They parted company at the funeral parlor and Crohn took Tompkins inside. Raef planned to attend the funeral the next day, but in the meantime, was consumed thinking about the burial spot. He had never noticed any grave markers by the schoolhouse.

The next morning Raef, dressed in his best Sunday suit, made his way over to the schoolhouse. The children in the schoolhouse pressed noses to the window panes to watch the sparsely attended proceedings before being shooed away by the old school marm.

Pastor Craig, Crohn, and Raef were the only villagers in attendance, with the exception of Jib Tompkin’s wife and child. You see, rather than grave markers next to the fresh plot, a smallish maple tree stood. Opposite the maple stood a medium sized oak. Both were budding out, no other trees in the village were. Though the breeze was swirling down from the hills, their limbs danced happily toward the sky.

Raef felt no sadness as they gently lowered Jib Tompkins into the ground without a coffin. As requested many years ago, Crohn buried him standing up, his hands pointed toward the heavens. The three men knew why. In June, an oak popped through the earth’s grassy shell next to the maple tree. In the ensuing years, Raef watched it grow, faster than any tree he had ever seen. Some days, he would stop by the schoolhouse and see the children playing and climbing the branches of the maple. And on particularly breezy summer days, the swaying limbs of the two oaks would touch and caress each other. 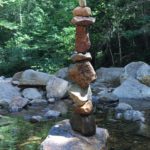 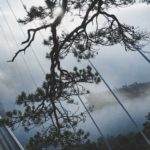